The Creation of Central Park

“Give me your tired, your poor,

The wretched refuse of your teeming shore.

Send these, the homeless, tempest-tossed, to me:

I lift my lamp beside the golden door.”

So reads the famous quote by Emma Lazarus on the plaque at the Statue of Liberty. Indeed, immigrants poured into New York City during the 19th century while industry drew in domestic workers from the countryside. The results were the rapid growth and development of NYC and an increasingly dense population with no room to breathe. From that immigration and industry boom, the dream of Central Park was born. 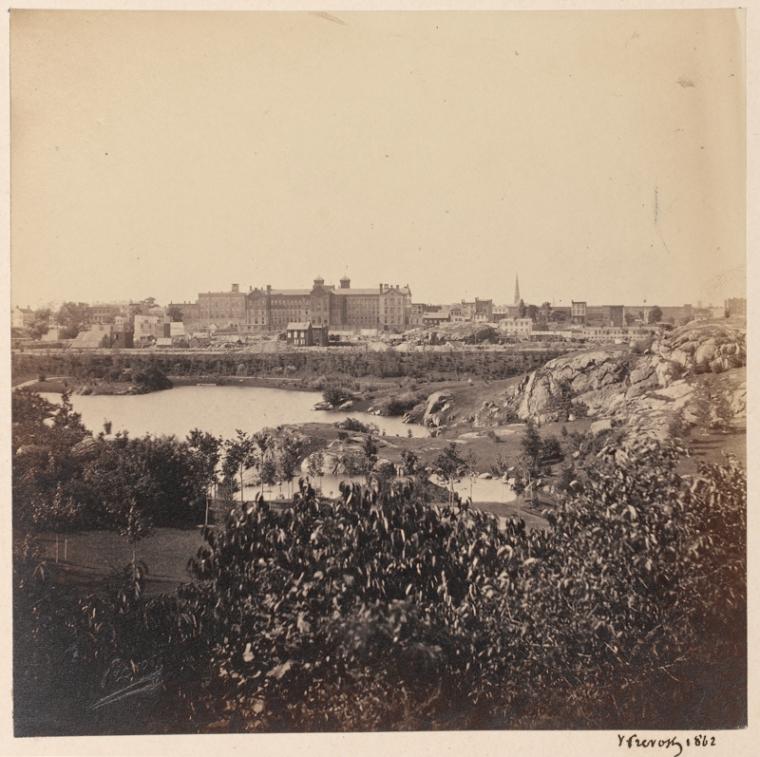 For many, the desire to create a space to breathe was quite literal—overwhelmed by the skyscrapers and feeling boxed in, they longed for open spaces with green grass and trees.

For others (and often with an overlap), the desire was more socioeconomic—the wealthy didn’t like being boxed in with poor minorities, and saw a centralized park as a way to remove those who were unwanted and bring upper class European concepts of civility to the city.

Real estate developers also saw opportunity in the idea of a major urban park. The quality of life improvements a park would bring would also enhance the values of neighboring properties. 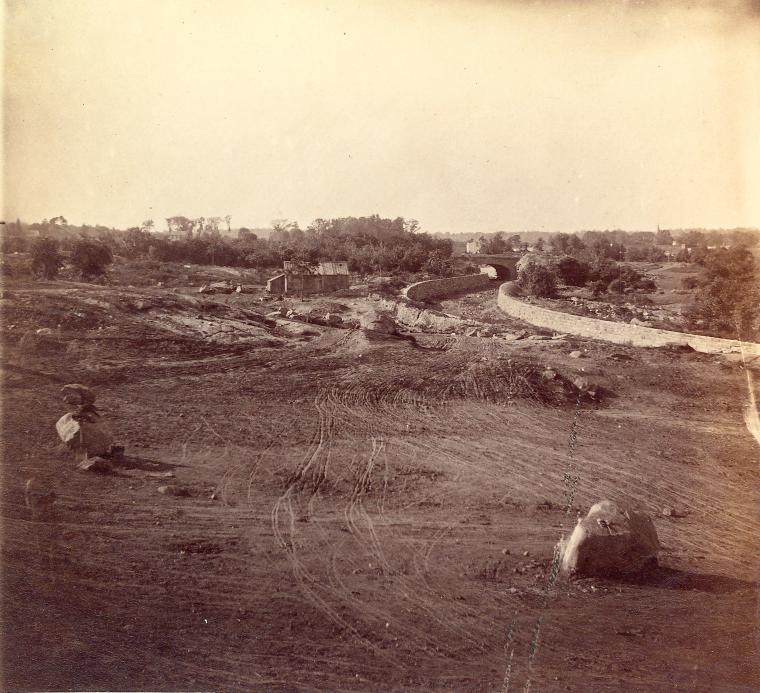 Central Park was the first landscaped park of its kind in the US. The particular spot chosen for the park was practical. The terrain wasn’t conducive to the construction of buildings. Some parts were too rocky, while others had a marshy quality. So it was logical to convert it into a landscaped recreational zone instead.

Who would design Central Park? The Central Park Commission the state government created to oversee the project decided to hold a public contest to select the best plan. More than 30 entries were submitted. Among them was one “Greensward Plan” by Frederick Law Olmsted and Calvert Vaux. Olmstead was a superintendent and Vaux was an architect.. Their plan was the one which was ultimately selected. 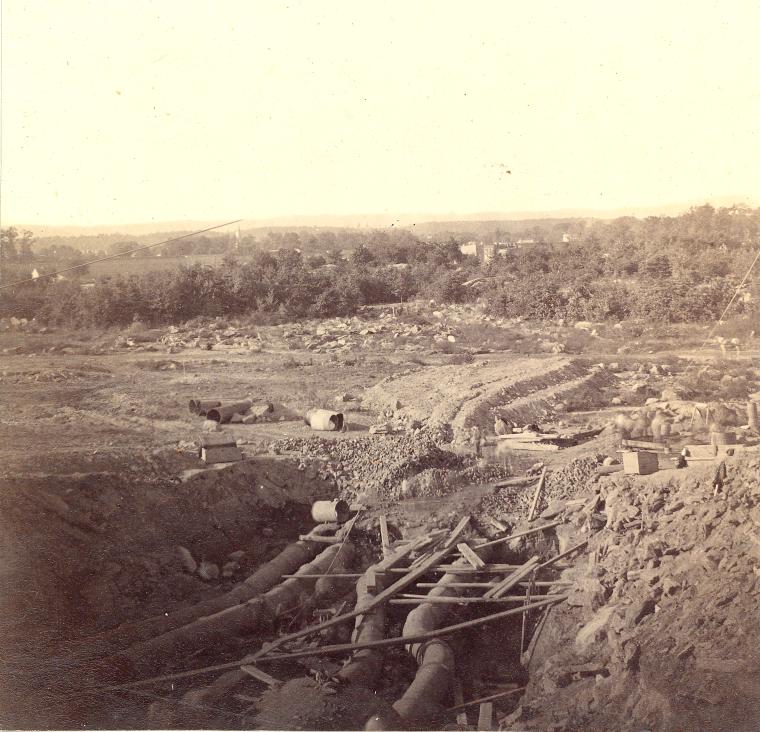 Olmstead drew his inspiration for Central Park from public parks he had visited while touring Europe. One prominent example was the Birkenhead Park near Liverpool. Others (also in Britain) included Chirk Castle, Chatsworth, the Derby Arboretum, and Birmingham Botanical Gardens.

The original Greensward Plan guided the development of Central Park, but the finished park today does diverge from that plan in significant ways. For example, the Croton Reservoir which was in the original plan is not present in today’s park, though many of the other manmade lakes the plan called for are. 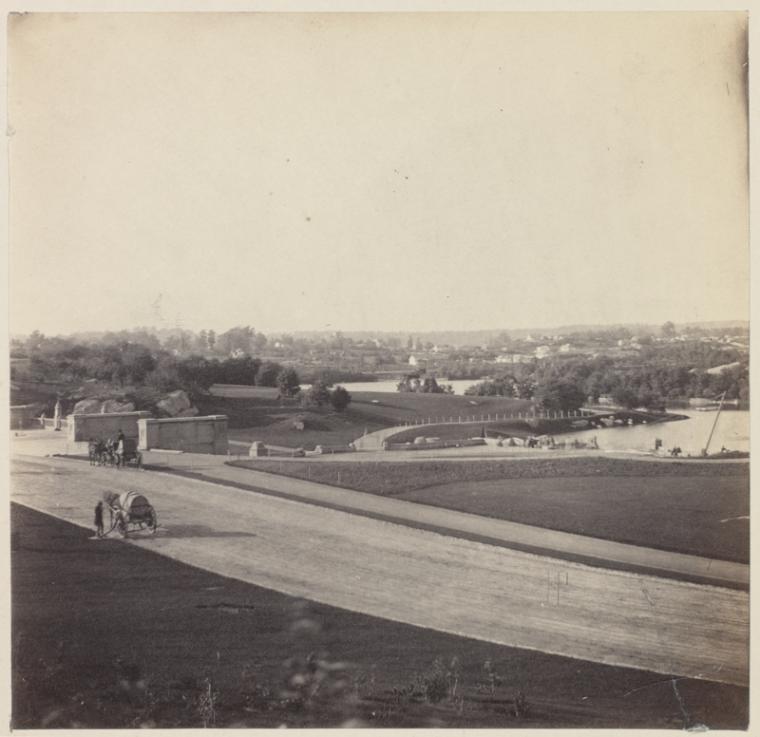 Before construction could commence on Central Park, destruction was necessary. Central Park wasn’t uninhabited. In fact, around 1,600 people were living there. In order to remove those people, authorities called on eminent domain.

The New York Times explains, “In today’s world, it is hard to imagine even a progress-minded city administration evicting a well-established minority community after arbitrarily paying its residents for their possessions. But that’s how Central Park was made, with most newspapers cheering the removal of ‘the insects.’”

While multiple communities were destroyed, the largest appears to have been the black community of Seneca Village. 264 residents were evicted in 1855. These residents were given no options, and those who resisted were removed violently. Ironically, the community had previously served as a safe haven from the discrimination black residents were encountering elsewhere.

You can visit the site where Seneca Village used to be located by visiting West Side at 82nd-89th Streets. If you want to learn more about the history of the village, you can get tickets for a tour which lasts 90 minutes and gives you a in-depth look at what happened during that time.

Today, everyone can enjoy Central Park, but it is important to recognize the classist and racist roots of the development. But this isn’t to say that everyone involved in the project was intent on clearing out the “insects.” Some had motivations that were entirely the opposite and saw the park as a way to bring the residents of NYC together across class divides. 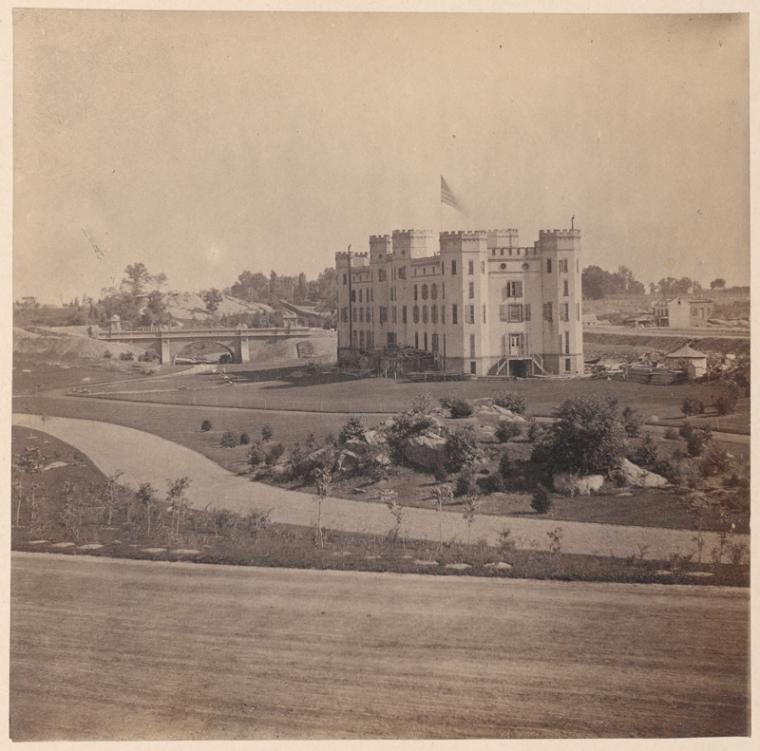 Indeed, Smithsonian Magazine explains, “In Olmsted’s eyes, the park would be a great equalizer among New York’s stratified classes. He’d been inspired by gardens in Europe, and especially by a visit to Birkenhead Park, the first publicly funded park in England. He noted that the site was enjoyed ‘about equally by all classes,’ unlike most of the other cultivated natural grounds at the time, which were privately held by the wealthy elite.”

Smithsonian Magazine continues, “A similar park would be, for Olmsted, an important part of the ‘great American democratic experiment,’ says Stephen Mexal, an English professor at California State University … ‘There was a link that he thought was meaningful between genteel manners, people of genteel birth and genteel landscapes,’ Mexal says. ‘And he said, ‘Well, what if we just kind of took those 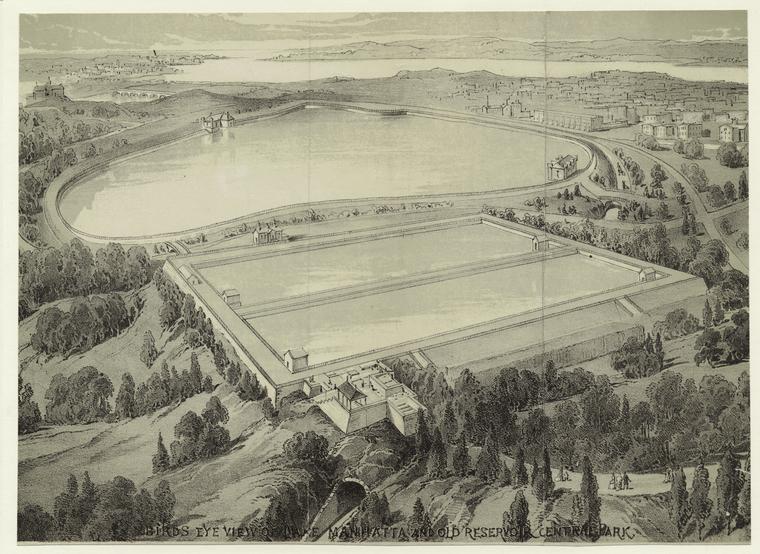 landscapes and made them more available to everybody?’ So, he said that the park would have this, quote, ‘refining influence’ among everybody in the city.’”

There is still classism inherent in this thinking, as Olmstead was projecting his expectations of a “genteel” way of life on the masses. He saw a superiority in the white upper class lifestyle, and thought that everyone would naturally agree with his vision as one which was universally appealing.

At the same time, for that time and place, his vision was idealistic. It is clear that he felt he could reduce social ills for all classes through smart and democratic urban planning. 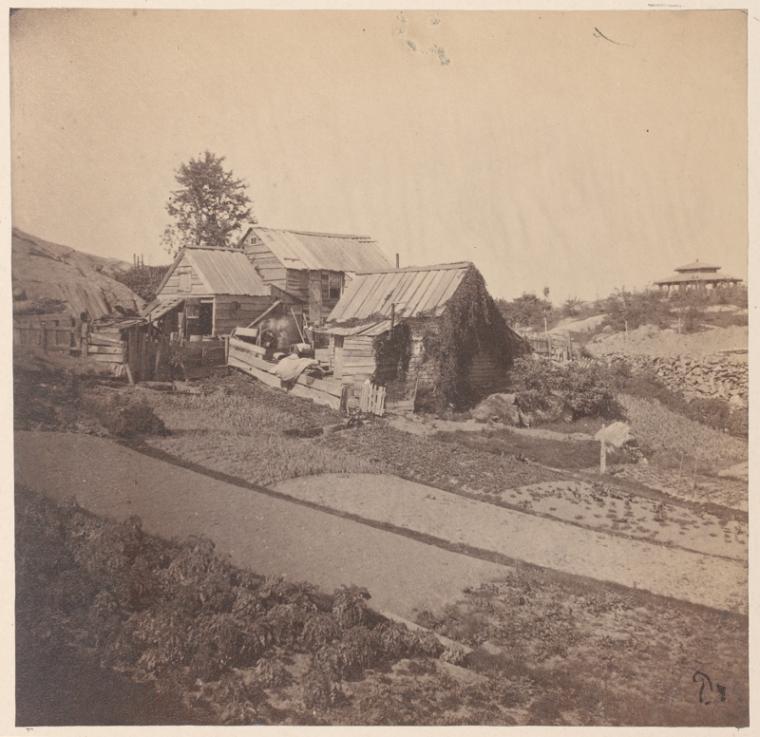 After the residents of the site were removed by force, construction of the park began. Politicians (and residents) argued about the cost of the park, which was triple the original estimate. The lengthy disruption was also a consideration, being as more than a decade of work was in store for those who would labor on it.

Work commenced in 1857, allowing the first section of the park to open publicly just one year later. Some of the thousands of workers were domestic, while many others were immigrants from Germany, Ireland, and Scotland. Twelve-hour days were common. Most workers went home with $1.50 in pay. According to this inflation calculator, that is equivalent to $44.21 in today’s wages. Construction would continue until 1873. 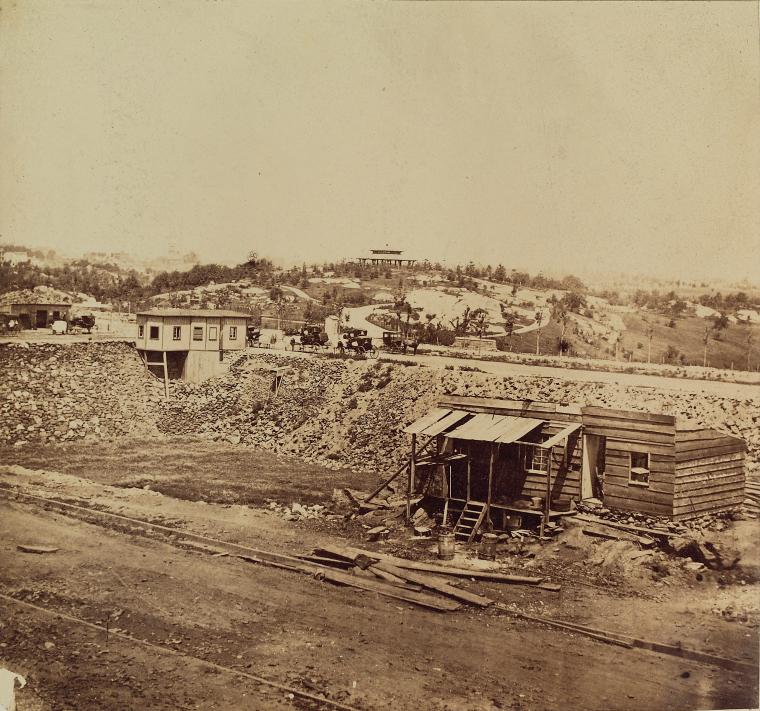 In the middle of that time period, Olmstead lost his job as superintendent. In 1860, Andrew Haswell Green took the helm. Under his supervision, the project expanded to encompass 65 more acres. Green didn’t have the same experience with architecture that Olmstead did, but he did excel at efficiency. 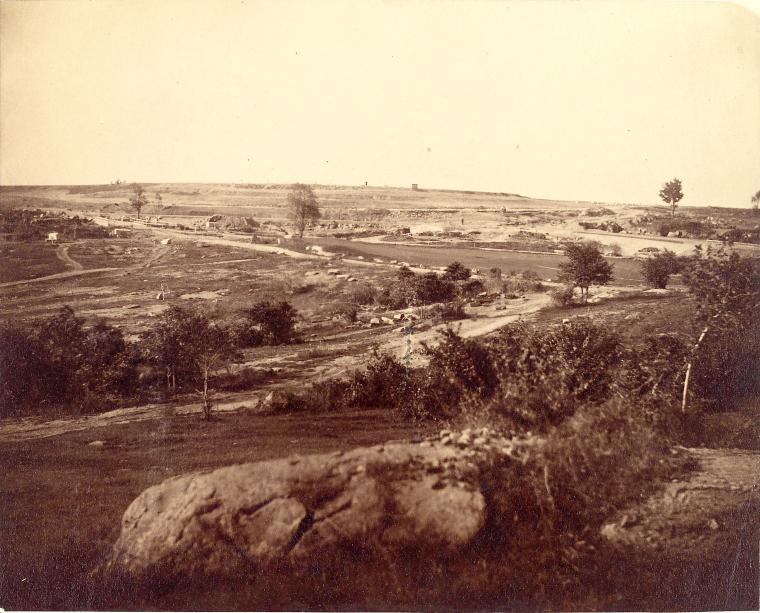 An extraordinary quantity of rocks and dirt needed to be removed from the park while the builders were transforming the landscape. Interestingly, the same gunpowder which was used during the Civil War (which began raging in the middle of the period of construction for the park) helped in this process. Indeed, usage of gunpowder in the construction of Central Park outpaced usage of gunpowder at Gettysburg.

The Civil War did cause disruptions and delays in the construction of the park. Nevertheless, workers were able to finish the Casino restaurant and the Music Stand, neither of which are still present at the park today. Indeed, they were replaced later by the iconic Bethesda Terrace and Fountain. 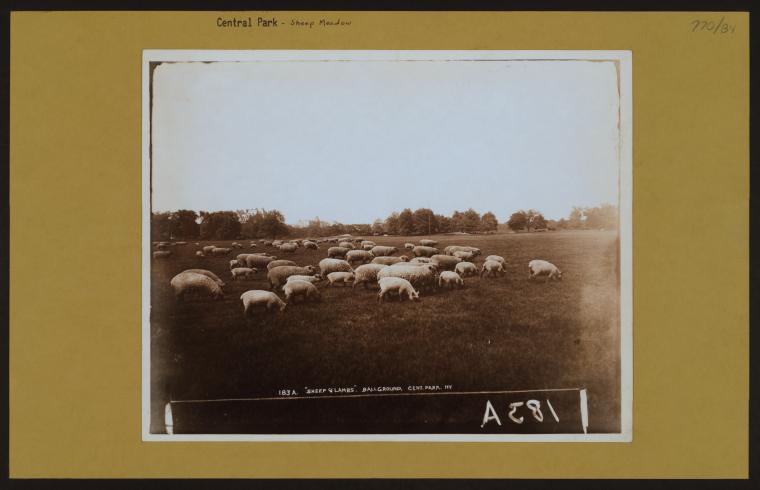 Almost all construction south of 72nd Street was done by 1861 while construction on the park north of that street continued in earnest. A year later, the Upper Reservoir was finished.

Even though the park was still under development, it already was drawing millions of visitors by 1867. Green’s tenure as superintendent of the project ended in 1865 and Olmstead and Vaux returned. At this point, work began on Harlem Meer, Belvedere Castle, and Conservatory Water while the Dairy, Children’s District and Ballplayers House were completed.

While Central Park did achieve in part its original “genteel” ambitions, its broad, democratic appeal did mean that many of the activities that took place there did not fit within that framework. 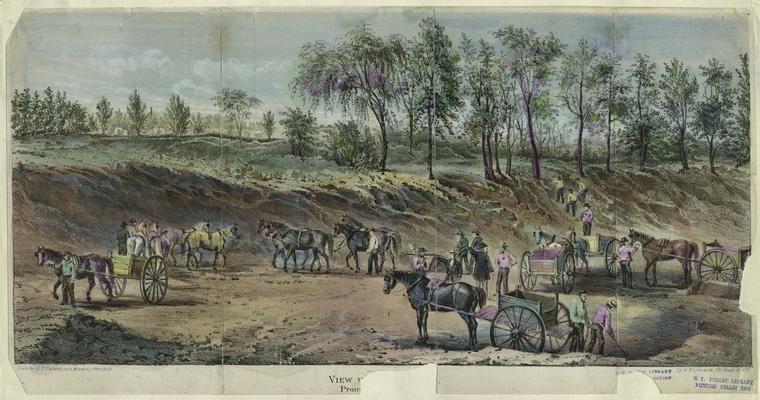 Smithsonian Magazine explains, “Though Olmsted bemoaned the ‘careless stupidity’ with which many misused his perfectly groomed landscape, his democratic experiment, once set in action, could not be reeled in.”

If you are wondering what “careless stupidity” entailed, it included activities such as carousel rides, picnics, and concerts. Curiously enough, tennis matches also apparently fell into this category. This is ironic, considering that in today’s world, many people associate tennis with an upper class lifestyle. At the time, the reverse seemed to be the case. 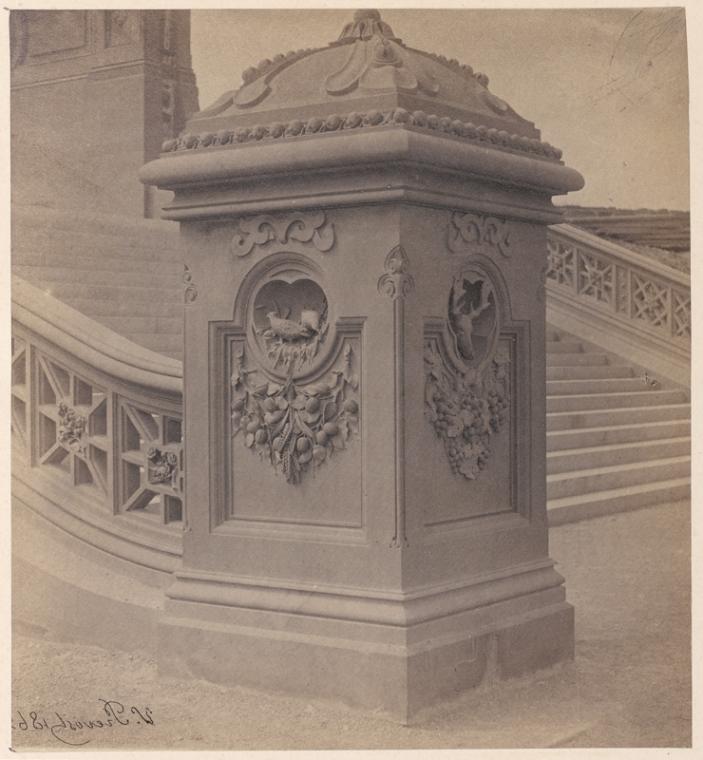 Smithsonian Magazine also explains how despite improving quality of life for New Yorkers across economic classes, the park was not able to erase social ills. Instead, “As New York continued its growth into the next century, Central Park, intended to be an outlet to relieve the pressures of city living, instead became a microcosm for the urban condition—its use reflecting the changing tides of its country.”

Olmstead and Vaux were once again ousted from their roles in 1870, at which point Green returned. This didn’t last long, as Green was connected to William M. Tweed, the Tammany Hall politician who was later found guilty of embezzlement. So, by 1871, Olmstead and Vaux were invited back to resume their work.

Some of the final structures completed in Central Park included Tavern on the Green (then a sheepfold), Ladies’ Meadow, and the 86th Street transverse administrative offices. In 1876, Central Park was officially considered to be complete. 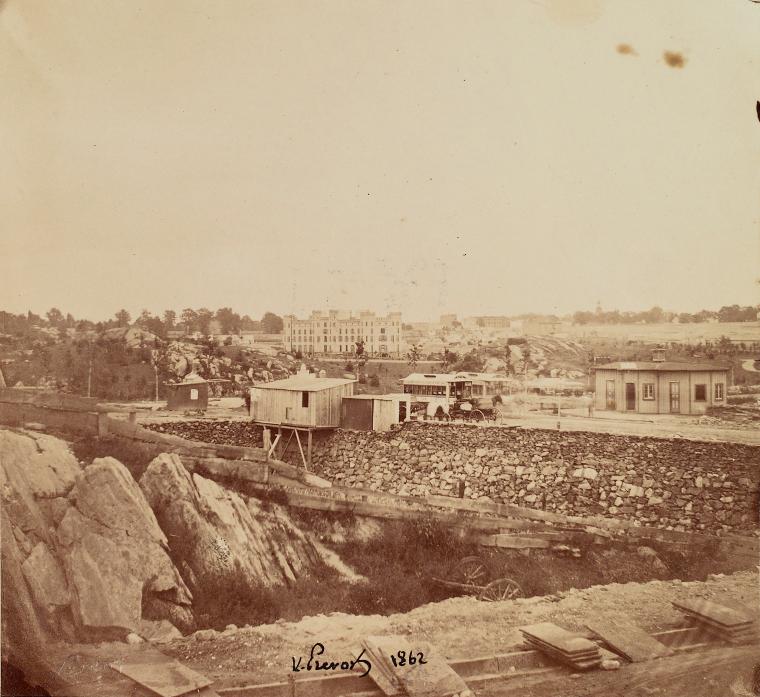 Despite the “completion” of the park in 1876, it would be incorrect to say that all construction was final. The reason for this is because Central Park has gone through various periods of decline and refurbishment over the many subsequent decades.

Indeed, the first of these periods of decline came as soon as 1879 under the Tammany administration. In 1886, architect Samuel Parsons was hired to restore the foliage of the park. As Parsons had apprenticed under Vaux, his vision was a match for Vaux’s and Olmstead’s.

Parsons remained in charge for quite a while. But after he wanted to engage in a project to replace Central Park’s soil, he lost the job in 1911. Throughout the 20th century, more subsequent periods of deterioration and restoration ensued. Some of the features of the park which we are familiar with today did not open until the 20th century. One example is the Heckscher Playground, which opened in 1926.

Maintenance on Central Park is ongoing, and the more committed the city is to its upkeep, the less extensive the renovations required are.

In recent years, several major structures in Central Park have been scheduled for periods of renovation. One of these was the Belvedere Castle, which was temporarily closed in 2018. An upcoming renovation is scheduled for 2020 through 2022 on Delacorte Theater. Finally, the Lasker Rink is scheduled to be closed from 2021 through 2024 with $150 million designated for its refurbishment.

Explore the History of Central Park in Person

Reading about the history of Central Park’s planning and development can be fascinating. But there is nothing like taking a tour of that history in person by visiting key sites and learning how they came to be.

The best way to discover the history of Central Park while you are visiting New York City is to take a Central Park pedicab tour.

With a pedicab tour, you can explore more of the park in a day than you could on foot, and you also can give your feet a rest for a relaxing experience.

Your pedicab tour guide also can fill you in on the details of Central Park’s history as you are seeing the sights. You’ll be able to ask as many questions as you want, and your tour can be personalized to the aspects of Central Park history in which you are most interested.

Ready to discover the history of Central Park for yourself? Book your reservation for a Central Park pedicab tour.

All photos of Central Park History is credit to NYPL