A Brief Overview and History

The Old Croton Aqueduct supplied clean water to New York City for over a hundred years. Until in 1955, operations completely ceased. The construction of this complex water supply system took five years to complete beginning in 1837 and ending in 1842. It was succeeded by the New Croton Aqueduct, which was built in the year 1890, several years before the Old Croton Aqueduct’s complete dissolution. The new water supply system, originally slated to aid the old one, quickly surpassed its predecessor however. And in 1940, then Commissioner of Parks and Recreation Robert Mosses had the obsolete Old Croton Aqueduct emptied of water and filled for a land development project. Today it exists as the Great Lawn of Central Park. 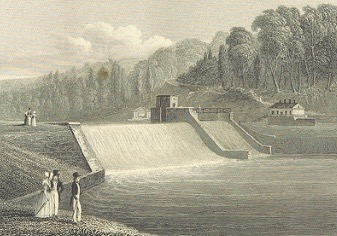 The beginning of the nineteenth century was a very important time for New York City. The city had already undergone a marked expansion at the close of the American Revolutionary War in 1783. And the transition into the industrial age thrust New York into the center of trade and commerce. A great number of industrial units were erected for mass manufacture and with it an economic boom. Population quickly inflated as immigrants flocked to New York seeking out work. At this point, the demand for clean, running water was at an all-time high. Unfortunately, as more and more factories and warehouses were built, an accumulated industrial waste polluted effluent channels compromising the city’s clean water supply. As a result disease and famine swept New York. Despite all of this, the city was thriving. 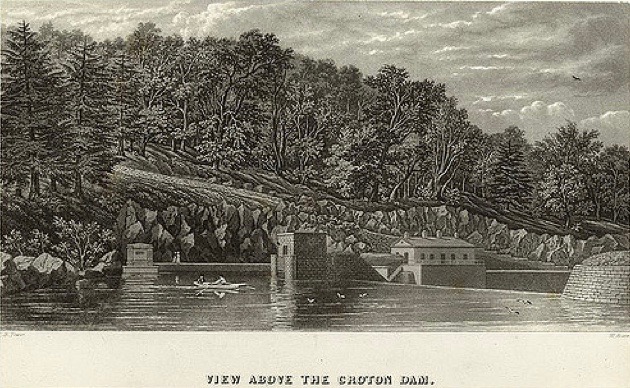 The need for improvement in the water delivery system was not sought for until 1835, when fires broke out consuming and destroying a large part of New York. The Great Fire of 1835 raged through 17 blocks and brought down hundreds of buildings. Property damage was estimated at 20 million dollars. This was just the first of three major fires to devastate the city. Consequently, water supply was critically diminished to assuage these fires.

New York needed water. But the existing means could no longer satisfy its gowning need. A simplified system supplied water to wealthier communities but it lacked an adequate filtration system. (The remaining bodies of water were polluted by industrial waste.) Impoverished districts suffered the most for they still relied heavily on deep-wells, cisterns and natural springs that were never enough. A more sophisticated water supply system was required to pump more water into New York. 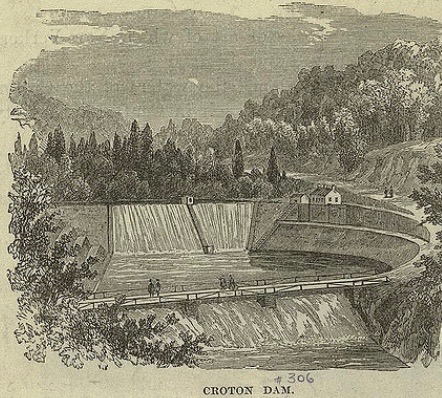 Following the suggestion of an engineering professor at West Point Military Academy by the name of David Bates Douglas, construction of an aqueduct was proposed. Douglas mapped out a route in which the pipeline was to be laid down. This elaborate pipeline would funnel water coming from upstate to the different parts of New York. So in 1837, under the supervision of Eng. John B. Jervis, the Croton Aqueduct was built in Westchester County, starting with the damming of Croton River. 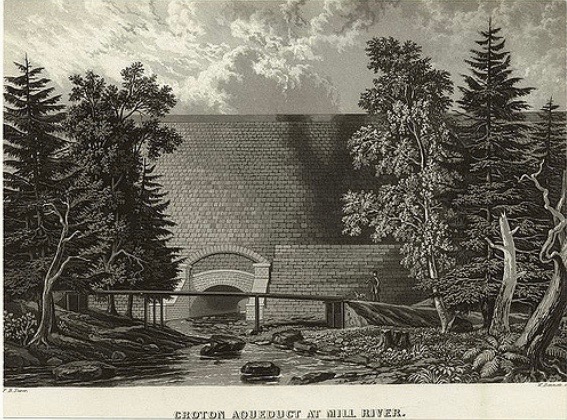 Old photos are credit to NYPL

The Croton Aqueduct Water Supply System had a dramatic impact on the many aspects of living in New York City at the time. Firstly, clean drinking water was in ample supply. A vast improvement in overall hygiene was also seen. As running water was made publicly accessible in June 1842, bathing became a normal part of everyday life. The intricate water delivery system also facilitated a modernization in interior design. Rich New Yorkers who could afford it had bathrooms built for private use in their homes. Additionally, bath houses were also constructed for the general public.

Water is essential to survival. For a city as thriving as New York, running water is everything. The refined engineering of the Croton Aqueduct Water Supply System heralded the advancement and further development of public water ways construction in New York. From there, the city had nowhere else to go but forward. New York saw newer and better ways to maintain running water and they were implemented continuously. Though sadly, the Old Croton Aqueduct system could not keep up with the aggressive expansion of the city. Nevertheless, it laid the groundwork for the creation of the New Croton Aqueduct System that still supplies water to New York City today. 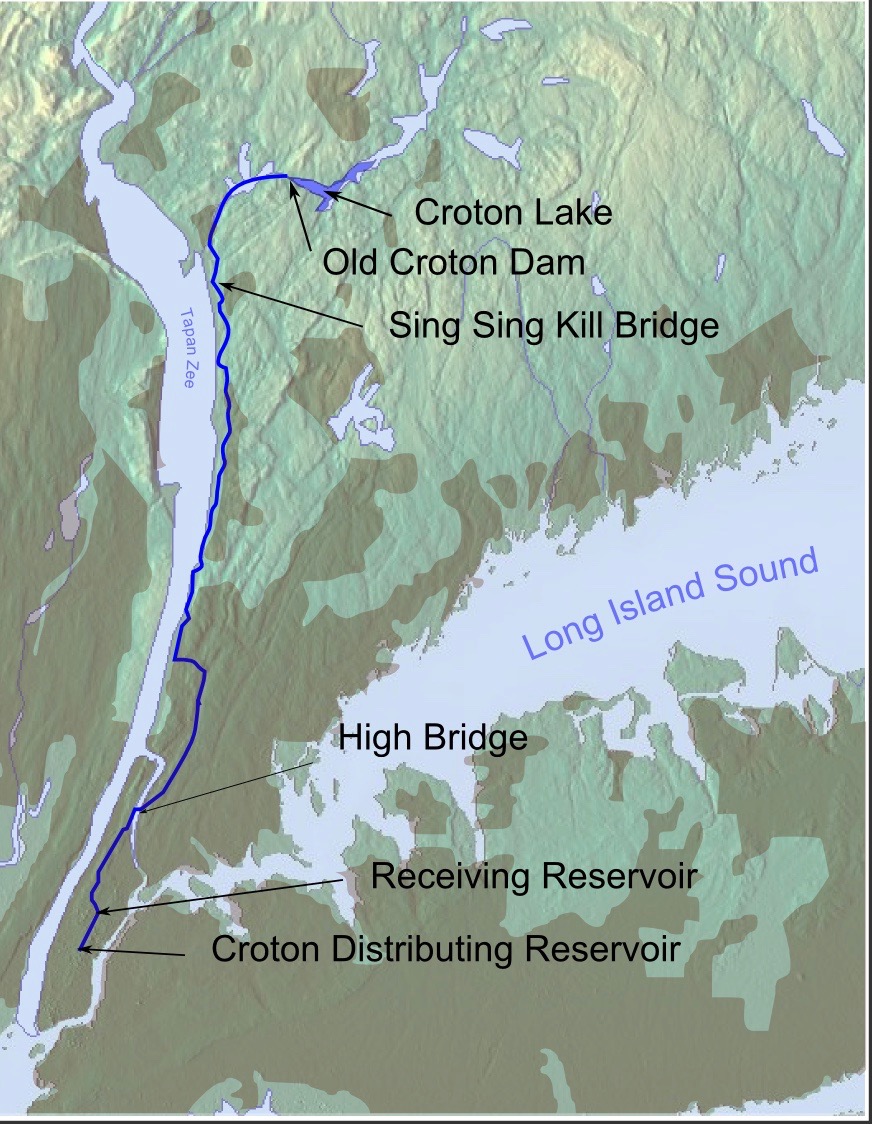 The Old Croton Aqueduct Water Supply System, situated in Westchester County, was an exemplary feat of engineering that spanned 42.2 km or 26.2 miles. It supplied water to nearly all segments of the city save four, namely Yonkers, Tarrytown, Scarborough and Ossining. The aqueduct leads to a receiving reservoir that serves as the stronghold which houses the New York water supply.

The Receiving Reservoir of the Old Croton Aqueduct covered seven blocks from 79th and 86th streets to Sixth and Seventh Avenues. The receiving reservoir was strategically built near the city so that in the event that the Old Croton Aqueduct ceased to function during renovations, New York would still maintain a steady water supply. It was particularly useful during times of drought or during the summer when rain was scarce. 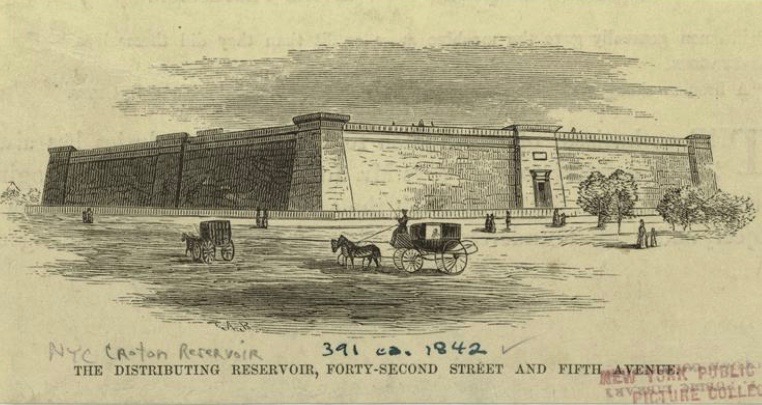 The reservoir was a tank-like structure, guarded by grand and fortress-like walls 1,826 feet (557 m) by 836 feet (255 m) with sides reinforced by stone brickwork.  It’s a much simpler design, just a rectangular structure unlike the Distributing Reservoir which boasted of Egyptian-like aesthetic. The entire structure was built over an uneven grass terrain enclosed in its entire perimeter by fences. The reservoir was built to have two basins, the north and south. This was to ensure that the reservoir could still operate despite repairs or renovations. It was also built with extreme foresight in that gates were built to supply future settlements that were to be built to the north. It still considered as an engineering masterpiece as current designs still follow the same concept.

On June 27, 1842, the Croton Aqueduct flowed for the first time into the Receiving Reservoir. The event was aptly celebrated with a 38-gun salute to commemorate the 38-long miles that spanned between the Croton Aqueduct and the Receiving Reservoir. The entire locality gathered to take part in the fanfare, and among the crowd were Robert H.  Morris, then Mayor of the City, and Governor William H. Steward.

The aqueduct was designed to supply water to over one and a half million people on a daily basis which many believed would be just enough to keep the amazing structure functional for many years. But because water was in such high demand, it took only 10 years before the allotted water consumption exceeded designers’ expectations. A steady hike in the population occurred between 1840 and 1850 and this became the reason for the insufficient water supply, which had to satisfy around 80 gallons per capita per day. It was at this point that officials felt the very real threat of having their supply run out.

Startled by the urgency of the situation, officials then realized that the Croton Aqueduct wasn’t capable of keeping up with the ever increasing demand for water. The obvious solution was to create a secondary reservoir to answer for what the first structure was unable to satisfy. This prompted the speedy creation of another reservoir which became fully operational in 1862. The second billion gallon Receiving Reservoir was put up between 86th and 96th street which was just a few paces away from the original.